Much has been written on the theory and practice of agile (or Agile, if you prefer—the debate is real) including books, blog posts, and formal training.

What this guide aims to cover in depth is how to apply that theory to branch management in git, specifically for those working with Drupal 7, Drupal 8 or Drupal 9.

The following content is based on the work of our talented friend and former colleague Matt Corks.

Who is this guide for?

This guide is for you if:

To make this work, it's best to use an issue tracker with a ticket for each user story, and to make all changes to your site on a separate git branch labelled with that ticket number.

The changesets should be self-contained, and perform all necessary database changes in code via update hooks, features (Drupal 7), or the configuration management system (Drupal 8/9). Any further steps necessary to test or deploy the new version should be clearly described in the ticket description.

Once all your updates are in code, you're ready to use git to prepare for and manage your testing and deployment process. You'll need to adopt specific git practices to make this work smoothly.

In Drupal 7, the best practice is to export all possible configurations using the Features module, so that it can be tracked and versioned in git. After setting up your site's views, content types, variables, and other configuration, you would use the Features module to export these to code as a series of special modules in sites/all/modules/features/ and from there commit them to git. It's simplest to group these by functionality (for example, you could create one features module which contains all the configuration necessary for the blog section of your site).

After making changes, run drush features-update-all to export the configuration from the database to code. To bring in changes after doing git pull you would run the command drush features-revert-all to import from the version in code to the database. You'll need to return to the Features module to add new components of your site (such as a new view) before they will be included in the set of configuration saved in a features module.

To learn more about exporting the configuration of your Drupal 7 site using features, see the documentation.

In Drupal 8 and higher, most configuration is stored in YAML files, making this much simpler.

By default D8 configuration is stored in the public files/ directory under a difficult-to-guess directory name. Wherever possible, add the following to settings.php or settings.local.php to define the config directory, which should be someplace outside the webserver docroot. (This means your website docroot will be a subdirectory of your git root folder, giving you a place above that to store test scripts and other files outside the docroot.)

Once this is done, run the following after making local changes on dev machines: drush config-export

You can now commit and push these changes to your git repository. To import these on test, staging, and production environments, do a git pull and then run the following: drush config-import -y

Like with D7 features, the suggested workflow is to avoid making changes to these files directly on the production website, but instead to deploy by importing from YAML. Changes made directly on prod will be discarded.

You can read more about the basics of configuration management in Drupal 8 here.

It's also possible to use configuration files during site install to spin up a site instance without a database, as described in this article.

You should also have a convenient way to fetch a copy of the production database from dev & staging environments (eg via drush aliases), and use the Stage File Proxy module to avoid having to sync public files from prod back to dev and stage environments until they're needed.

Use drush sql-sync --sanitize to reset passwords and email addresses in the user tables when copying the database (note that you can also capture all mail sent from dev and stage by sending it to a utility such as MailHog for local review).

To explain our preferred git workflow, we'll start by explaining some other, simpler workflows that can be used by smaller teams. My reference for this is the tutorial from Atlassian.

We're assuming knowledge of basic git concepts like branching, committing, and pulling. If these are new to you, we suggest taking the time to read an introductory tutorial such as this one, again from Atlassian.

This is the simplest possible git workflow. 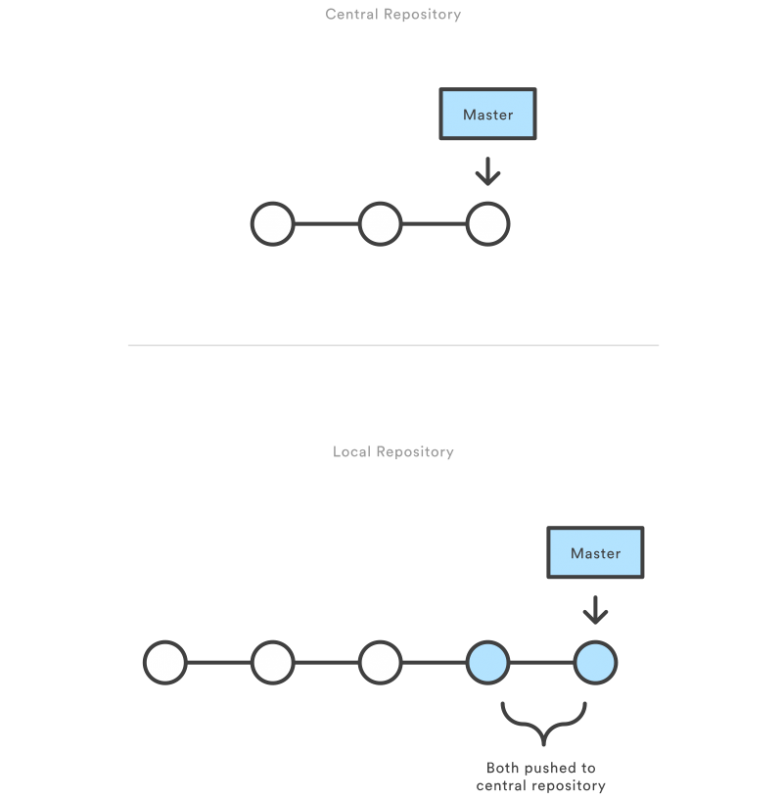 Once multiple people are working on a codebase at the same time, it's necessary to use a more sophisticated model. Many open source projects on GitHub work this way, with one person responsible for testing and approving all proposed changes.

Once your project requires a review process for each set of new features, some of which may depend on others to be completed at the same time, it's necessary to create branches for each release so that these can be tested as a group. It follows that you might need to remove a feature from a release if it isn't accepted during testing, and that you'll occasionally need to urgently fix the production version of the code without waiting for your usual release cycle. 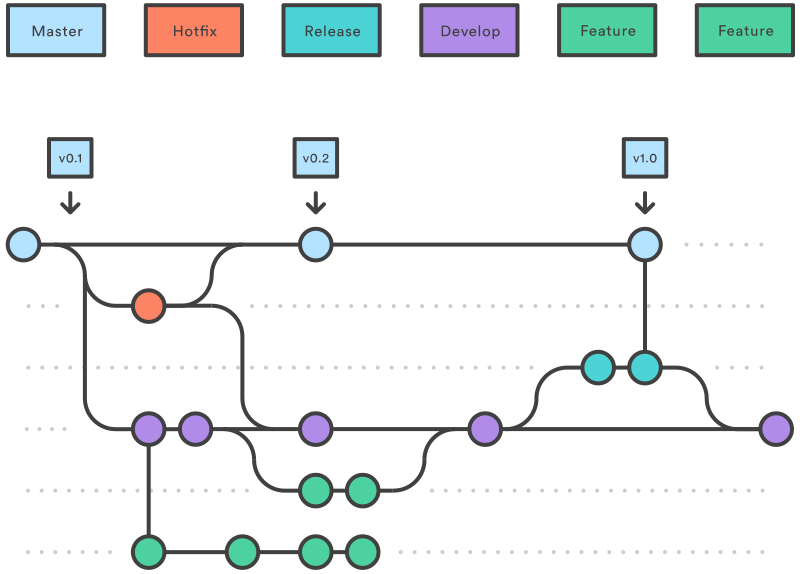 Make sure every commit message includes the ticket number, both to create pointers from your issue tracker, and to allow you to find commits related to a given ticket at a later date. You can even set up your CI/automated testing scripts to reject commits without numbers, and create a script in .git/hooks/prepare-commit-msg.sh to insert this automatically in the commit message template. Here's one such script.

Set mergeoptions = --no-ff for the master and dev branches in .git/config so that every merge to those branches has a merge commit for later tracking.

You might want to use multiple remotes, for example a local GitLab instance, GitHub for automated integration with Circle CI, and a git instance at your hosting provider (e.g. Pantheon). You can do this by creating a placeholder remote called "all" with multiple pushurl URLs defined.

Start working on a feature

Rebase when you want to rewrite history (e.g. remove commits of debugging code); merge when you want to preserve history. You should only rebase a local branch that isn't yet pushed to origin and shared with others! If you're not already familiar with rebasing, ignore this section. If you really want to learn about this, this tutorial is helpful.

If your goal for rebasing is simply to reduce clutter in your git log, consider using git merge --squash when merging feature branches into dev to combine all changes into one new commit. This is safer than rebasing, and won't cause problems for others.

Review and accept a feature

Once enough tickets have been closed and their corresponding feature branches merged into the dev branch, create a release branch and deploy to your staging environment for review.

Your tickets should be small enough in scope that merge conflicts don't happen very often. Here are three things you can do when they come up:

There are lots of resources on resolving conflicts online. Here's one good intro-level tutorial.

Here's an example of working with a three-way merge using vim.

A lengthy description of this process is available here.

Find the commit that made a given change

A common complaint about gitflow is that it fills your git history with merge commits, but in fact git allows you to exclude these with git log --no-merges (or to show only merges with git log --merges).